Lobbying and sound policy research is essential to our cause

See how we work

Our events extend beyond the legislative session. Come join us.

Our board member's hard work and dedication make it all happen.

Who We are. Our mission 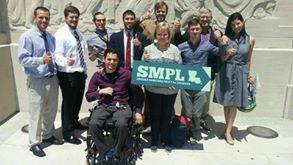 SMPL is an organization dedicated to statewide coalition building, sound policy research, education and advocacy for substantive drug law reform. We are headquartered in the capitol of Baton Rouge where we lobby at the local and state level, but have affiliates in every major city throughout Louisiana. The SMPL board is a dynamically diverse mix of professionals who share one passion in common for making our laws for marijuana both modernized and civilized. We bring to the task a varied mix of seasoned and younger advocates, different political orientations, ethnicities, sexes, socio-economic backgrounds, birthplaces and skill sets or expertise. By going public with our growing coalition and amplifying publicly available information, we seek to help expose the ulterior motives of the vested drug warriors and undo some of the deep damage that results from the stigmatism of any non-violent fully consenting private consumption of a naturally occurring medicinal plant. learn more

Help Us Reach our Goal

Interested in helping out? SMPL is a 501c4 registered non-profit funded entirely by donations.

Wellcana Group has big expansion plans for its LSU-licensed medical marijuana operations in Louisiana and is separately courting farmers to grow hemp to support the company’s launch soon into CBD products. Wellcana — which already operates out of Baton Rouge and is one of only two companies approved in the state to produce medical marijuana — is scouting out land in a less-populated area between Baton Rouge and Lafayette for additional cultivation room for medical marijuana, officials said. The company expects … read more

Prohibition began 100 years ago, and its legacy remains

In this era of bottomless mimosas, craft beers and ever-present happy hours, it’s striking to recall that 100 years ago the United States imposed a nationwide ban on the production and sale of all types of alcohol. The Prohibition Era, which lasted from Jan. 17, 1920, until December 1933, is now viewed as a failed experiment that glamorized illegal drinking, but there are several intriguing parallels in current times. Americans are consuming more alcohol per capita now than in the … read more